Entrepreneur Fred Harvey opened a series of eating houses along the Santa Fe Railway that evolved into America's first restaurant chain, the Harvey Houses. The company, which operated from 1876 through the 1960s, introduced innovations such as the refinement of dining in the West and the widespread employment of women known as "Harvey Girls." This collection offers images of Harvey Girls that worked at one of Winslow's three Harvey Houses, including La Posada Hotel.

In order to provide exceptional dining to railroad passengers, Fred Harvey demanded the highest food preparation and service standards at all times. Male waiters were unable to uphold these standards to Harvey's satisfaction, so he introduced the Harvey Girls in 1883. The waitressing profession had a poor reputation at that time, so Harvey Girls had to be well-mannered, neat in appearance, and educated through the eighth grade. They worked 12-hour shifts six days a week, lived in dormitories with house matrons and curfews, and signed six-month contracts stipulating that they would remain unmarried. Despite the hard work and restrictions, over 100,000 women took the opportunity to work respectable jobs, earn good wages, travel the country, and meet prospective husbands. Over 50,000 of them married western men and settled in towns along the Santa Fe line.

Winslow's first Harvey House restaurant and hotel opened south of the tracks in 1887, and the Winslow Mail reported the arrival of Harvey Girls in the 1890s. The structure caught fire in 1914, and the Santa Fe built a larger version just a few months later. Winslow's proximity to unique natural and cultural sites made it an ideal tourism destination, so La Posada (Spanish for "the inn"), Fred Harvey's last grand hotel and architect Mary Colter's masterpiece, opened north of the tracks in 1930. The Santa Fe used the first floor of the older Harvey House for division offices, and La Posada's Harvey Girls lived upstairs in the former hotel rooms. La Posada's restaurant facilities accommodated over 200 diners and included a formal dining room and a sit-down lunchroom with Mexican-tiled lunch counters. Traditional Harvey Girl uniforms were considered too severe for the hotel's southwestern setting, so colorful appliquéd aprons were introduced during World War II. Over the years, many Winslow Harvey Girls left service to marry local railroaders, ranchers, and businessmen and settle in town, where generations of their descendants still reside.

With the advent of more efficient trains and the explosion of automobiles, railroad travel began its decline and Fred Harvey began closing trackside restaurants and hotels in the 1930s. World War II temporarily reversed the trend, and La Posada hired more Harvey Girls to serve meals to 3,000 soldiers riding through town daily on "troop trains." The hotel finally closed in 1957 but escaped the wrecking ball when the Santa Fe converted it into division offices in the early 1960s. Locals organized the La Posada Foundation in the early 1990s and secured grant funds to help save the building. In 1997, Allan Affeldt and his wife, artist Tina Mion, purchased La Posada and reopened it as a premier hotel and gardens. Founded in 1995, the all-volunteer Winslow Harvey Girls provide guided tours of La Posada and set up "trunk shows" featuring their extensive collection of Harvey House and Santa Fe china. 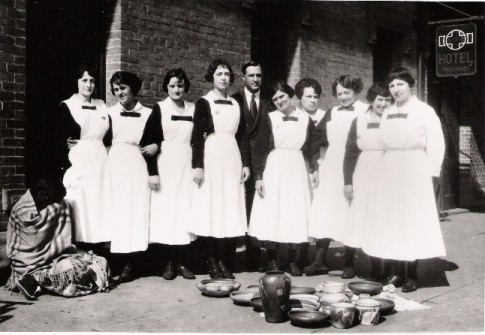