This collection offers images, some over 100 years old, of Native American life in and around Winslow, a border town to Hopi and Navajo tribal lands. Members of both nations have migrated between their lands and Winslow for trade, employment, education, public services, and entertainment. Winslow is also a second home to many Laguna families, whose men were employed by the Santa Fe Railway in exchange for the right to cross their Pueblo lands in New Mexico. Winslow's Laguna residents lived in a group of converted boxcars on Santa Fe property known as the Laguna Colony.

Ancestral Puebloans, ancestors of the Hopi, inhabited the Homol'ovi villages just northeast of present-day Winslow starting in AD 200. Inhabitants mastered techniques for growing corn in the high desert, and they likely grew and traded cotton for pottery with the Pueblo villages on the mesas to the north. Homol'ovi's inhabitants likely migrated to those mesas at the end of the 14th century, and the land they left behind now constitutes Homolovi State Park. In 1882, the federal government established the Hopi Reservation on the northern mesas, which are a one-hour drive from Winslow.

The Athabaskans, hunter-gatherer ancestors of the Navajo, may have arrived in the Southwest as early as the 1400s from northern Canada. By the 1700s, Navajos, or Diné ("the people"), were building hogans, growing crops, tending sheep, and engaging in mutual trade with Pueblo people and others living on the Colorado Plateau. Established in 1868, the Navajo Reservation is the largest tribal entity in the United States in both population and area, straddling parts of Arizona, Utah, and New Mexico and bordering Winslow to the north.

The Santa Fe All-Indian Band formed in 1923 when several Native American musicians played at a Santa Fe employee picnic. Hopis, Navajos, and Lagunas who worked for the railroad, along with their family members, could participate in the concert and marching bands as well as in the hoop and fancy dancing group. The band played at hundreds of special events over their 41 years including Winslow Christmas Parades, Arizona State Fairs, gubernatorial inaugurations, the 1935 California Pacific International Exposition in San Diego, and President Eisenhower's 1953 inauguration parade in Washington, DC.

Indian mother and children with dog 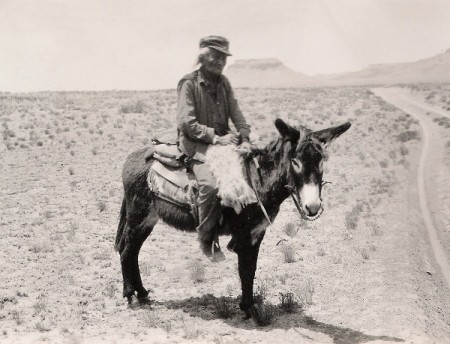