These images provide a sampling of the Old Trails Museum's collections, which include objects, documents, photographs, textiles, and oral histories donated by current and former Winslow residents. Most of these items are on display at the museum, which interprets them through free exhibits and public programs that explore Winslow's diverse history.

Winslow was founded as a railroad town. In 1880, the Atlantic and Pacific Railroad laid out the Winslow townsite along its new transcontinental line through northeastern Arizona Territory because the nearby Little Colorado River supplied a vital water source. The river had sustained the prehistoric Homol'ovi villages, and a passable ford across the river brought trails, wagon roads, and Mormon settlers to the area even before the railroad arrived.

The Atchison, Topeka and Santa Fe Railway bought the Atlantic & Pacific in 1897 and transferred division headquarters from Gallup, New Mexico, to Winslow. The influx of employees and infrastructure transformed Winslow from a railroad boomtown to a major city along the principal rail line to the West Coast, and railroading dominated the lives of most residents during the first half of the 20th century. Winslow's location as a livestock, trade goods, and lumber shipping point also contributed to its growth and stability.

Its proximity to natural and cultural sites made Winslow an ideal tourism destination. Entrepreneur Fred Harvey opened Winslow's first Harvey House in 1887 and La Posada, the Santa Fe's last grand hotel, in 1930. Designated in 1926, US Route 66 ran through Winslow on Second and Third Streets, and several thousand cars a day drove through downtown during the 1950s boom years. In 1929, Charles Lindbergh designated Winslow's new airport as a key stop along Transcontinental Air Transport's first coast-to-coast passenger route. For all these reasons, Winslow enjoyed the largest population in northern Arizona from 1900 through the 1950s.

Winslow's growth was scuttled when the Santa Fe began to modernize operations and expand its workforce elsewhere. The Interstate 40 bypass devastated downtown when it opened in 1979, but there has been a Historic Route 66 revival in recent years. Winslow's population and economy remain both diverse and stable, and the city's historic attractions, Standin' on the Corner Park, and nearby tribal lands continue to lure visitors from around the world.

Gravy boat with underplate, not attached

Take Up Your Mission, Mormon Colonizing Along the Little Colorado River 1870-1900 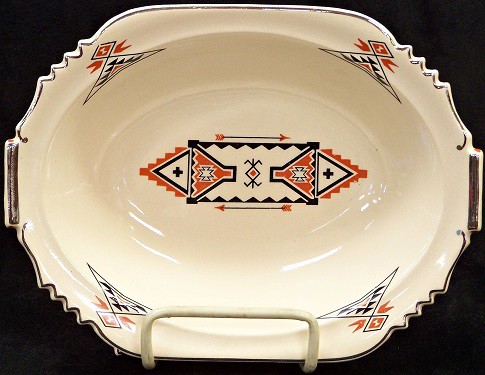